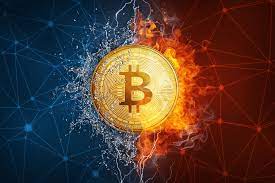 Bitcoin and ethereum fell on Tuesday, echoing weakness in technology stocks and other riskier assets, as the threat of inflation and increasing likelihood of steep rate rises left investors looking for less volatile investments.

This is the first time bitcoin has dipped below the $40,000 mark since the middle of March. The market has come under fairly sustained pressure in the past week, as red-hot inflation around the world has raised the chances of a string of interest-rates rises and Russia’s war in Ukraine quashed investor appetite for riskier assets.

Marcus Sotiriou, Analyst at GlobalBlock, echoed this sentiment in his market note on Tuesday.

“In my opinion, this can mainly be put down to the current macro headwinds at hand. With soaring inflation, retail does not have enough money to invest significant amounts in what they deem as ‘risky’ assets like cryptocurrencies,” he said.

Just three weeks ago, the index was at its highest point since November, as bitcoin rallied above $47,000 and the broader crypto market was more bullish.

However, in the past week inflation figures and the minutes from the most recent Federal Reserve meeting have dented this risk appetite and pushed investors back to towards more defensive assets.

Bitcoin remains highly correlated with large-cap technology stocks, which some market watchers — most notably, Arthur Hayes, the co-founder of crypto exchange BitMEX — think will make it vulnerable to a bigger decline if that sector comes under renewed pressure

“As long as the 10-day correlation stays high, we must stay defensive on our crypto positioning,” wrote Hayes, who believes that bitcoin could test the $30,000 level towards the end of the second quarter.

Smaller coins also felt the hit, with a number of the more widely traded tokens losing up to 6% at one point during the morning on Tuesday.